Big Bear Airport is located in Big Bear City, California. Situated in the San Bernardino mountain range, 6,752 feet above sea level, the Airport serves several of the surrounding small communities, as well as Southern California’s only four season resort, Big Bear, with general aviation air service. Big Bear Airport is open to the general public and to visiting aircraft 24 hours a day. Although the Airport does not have any commercial passenger activity, it does provide services such as aircraft maintenance, sightseeing flights, and emergency services. The Airport has been in continuous operation at this site since 1928.

Big Bear Airport is located in Southern California, approximately 40 miles outside of the Los Angeles metropolitan area, on the southern boundary of the San Bernardino Mountain Range. The Airport provides a safe operating environment for general aviation aircraft, ranging from gliders to small corporate jets.

Big Bear Airport is operated with one primary runway, oriented in an east-west direction. Two parallel taxiways, one partial and one full, provide access to the runway from the general aviation development areas.

The primary runway at the Airport has a designation of 08/26. It is 5,850 feet in length and 75 feet in width. The runway is constructed of asphalt and has a gross weight bearing capacity of 12,500 pounds single wheel main landing gear configuration. The runway asphalt is currently in excellent condition and was reconstructed in 2004. The runway is equipped with Medium Intensity Runway Lights (MIRL), a 2-light Precision Approach Path Indicator system (PAPI) that provides a 4.0-degree approach slope to each runway end, and is marked with standard non-precision markings on each end.

In addition to the runway, the airside facilities at Big Bear Airport consist of a taxiway system that provides access between the runway surface and the landside aviation use areas.

A 45-foot wide full-parallel taxiway serves Runway 08/26 (Taxiway “A”). The taxiway is constructed of asphalt and has five connector taxiways that connect to the runway. The parallel taxiway is located on the south side of the runway and is separated from the runway by 200 feet (centerline to centerline). For night use, the taxiway system is equipped with a Medium Intensity Taxiway Lighting system (MITL).

Big Bear Airport District is the only fuel provider on the field while Vonesh Aircraft provides maintenance.

The Airport has approximately 142 hangar spaces in 31 separate buildings. The Airport has one maintenance/storage hangar located on airport property, as well as numerous storage units in leased hangars.

The airport’s fuel storage facility, which is owned and operated by the Big Bear Airport, is located on the south side of the runway, directly northwest of the terminal building, on the general aviation ramp. Completion of the new fueling facility was in September of 2018, which included two 15,000 gallon above ground tanks that meet or exceed current requirements for aviation fueling. One 15,000 gallon 100LL Avgas tank and one 15,000 Jet A tank capable of injecting prist on demand. Avgas is distributed from the fueling facility in two locations, Westside and Eastside of the tanks allowing for quicker fueling. Jet A is distributed on the Eastside of the fueling facility. Both Avgas and Jet A can be accessed 24 hours a day to the flying public and emergency services. The credit card machine is located on the north side of the fueling facility.

The Airport is served by an Automated Weather Observing System III Precipitation/Thunderstorm (AWOS III PIT), which was installed in 2005 and is located approximately 3,000 feet east of the Runway 08 end of pavement, and 450 feet south of the runway centerline. This facility measures wind speed, wind gusts, wind direction, wind variable direction, temperature, dew point, altimeter setting, density altitude, visibility, sky condition, and cloud height and type. The system is also capable of tracking precipitation and thunderstorm activity within 30 miles of the Airport. AWOS data is transmitted hourly to NWS. The AWOS III provides a minute-by-minute update to airborne pilots via VHF radio frequency. The radio frequency for the Big Bear Airport AWOS III PIT is 135.925 MHz. AWOS data is also available by phone at (909) 585-4033.

The Airport does not presently have an Aircraft Rescue and Fire Fighting (ARFF) facility on the field, however, fire protection services for the Airport are provided by the Big Bear City Fire Station No. 282, located approximately three blocks south of the east end of the Airport. As of February 2018, Mercy Air has a helicopter based at Big Bear Airport and, in conjunction with Big Bear Fire Department and the Big Bear Hospital, provides life saving air ambulance services to Loma Linda Hospital.

There are numerous automobile parking areas associated with the airport facilities. General and long-term parking is located adjacent to the general aviation terminal building.

As with all airports, Big Bear Airport functions within the local, regional, and national system of airports and airspace. The following narrative provides a brief description of Big Bear Airport’s role as an element within these systems:

Within the continental United States, there are some twenty-two geographic areas that are under Air Traffic Control (ATC) jurisdiction. Air traffic services within each area are provided by air traffic controllers in Air Route Traffic Control Centers (ARTCC). The airspace overlying Big Bear Airport is contained within the Los Angeles ARTCC jurisdiction. The Los Angeles ARTCC includes the airspace in Southern California and portions of Nevada, Utah, and Arizona.

Local airspace surrounding Big Bear Airport is represented by a combination of Class G and Class E airspace. The Class E Surface Airspace is typically represented as a five-statute mile radius circular area around an uncontrolled Airport and includes any extension necessary to include instrument approach and departure paths. Class E Airspace includes the controlled airspace extending upward from 700-1,200 feet above the airport elevation. These areas are generally designated at outlying airports with low activity and with non-precision instrument approach procedures providing high minimum descent altitudes. Radio communications and transponders are not required to operate within these airspace areas under visual flight rule (VFR) conditions; however, Instrument Flight Rule (IFR) flights must be capable of communicating with air traffic control (ATC), which is currently Southern California Approach for south and westbound traffic, Los Angeles Center for eastbound traffic, and Joshua Approach for northbound traffic. All IFR traffic must also be Mode C Transponder equipped (capable of reporting altitude).

Military airports, military operations areas, and restricted areas can also impact airspace use in the vicinity of a civil airport. There are two military airports located within a 35-NM radius of Big Bear Airport: March Air Reserve Base (KRIV) is located approximately 31 NMs to the southwest and Twenty-Nine Palms EAF Airport (KNXP) is located approximately 34 NMs east of Big Bear Airport. There are no Military Operations Areas (MOAs) in the vicinity of the Airport, however, there is a Restricted Area (R-2501W) located approximately 24 NMs northeast of the Airport. All civil operations in this area are restricted to an unlimited altitude and control is maintained by the Los Angeles Center on frequency 128.15.

A variety of navigational facilities are currently available to pilots around Big Bear Airport, whether located at the field or at other locations in the region. Many of these navigational aids are available to en-route air traffic as well. The navigational aids (NAVAIDS) available for use by pilots in the vicinity of the Airport are VOR-DME, VORTAC, and NDB facilities. Big Bear Airport has one instrument approach, a RNAV (GPS) RWY 26 and one instrument departure procedure for Runway 8, RNAV OKACO ONE departure. Information concerning the instrument approach and departure can be found at: www.airnav.com/airport/L35.

In addition, several existing visual navigational aids are located on the Airport and available to pilots. These include a rotating beacon and a lighted wind cone with segmented circle, which is located on the south side of Taxiway “A”, near the Taxiway “F” connector. Three additional supplemental wind socks are located in the vicinity of the east and west ends of the Airport and mid-field. In addition, both runway ends are equipped with Precision Approach Path Indicators (PAPI), which provide descent guidance for the visual segment of the approach, and are configured for a 4.0-degree glide path angle.

The airfield property is located in the central portion of Big Bear City, east of Big Bear Lake and west of Baldwin Lake. The Airport is located in a valley surrounded by rapidly rising terrain associated with the San Bernardino Mountain Range. Aircraft access to the Facility from the west through the Cajon Pass area is the recommended route, due to its relatively flat mountainous terrain and clearance of leeward mountains. 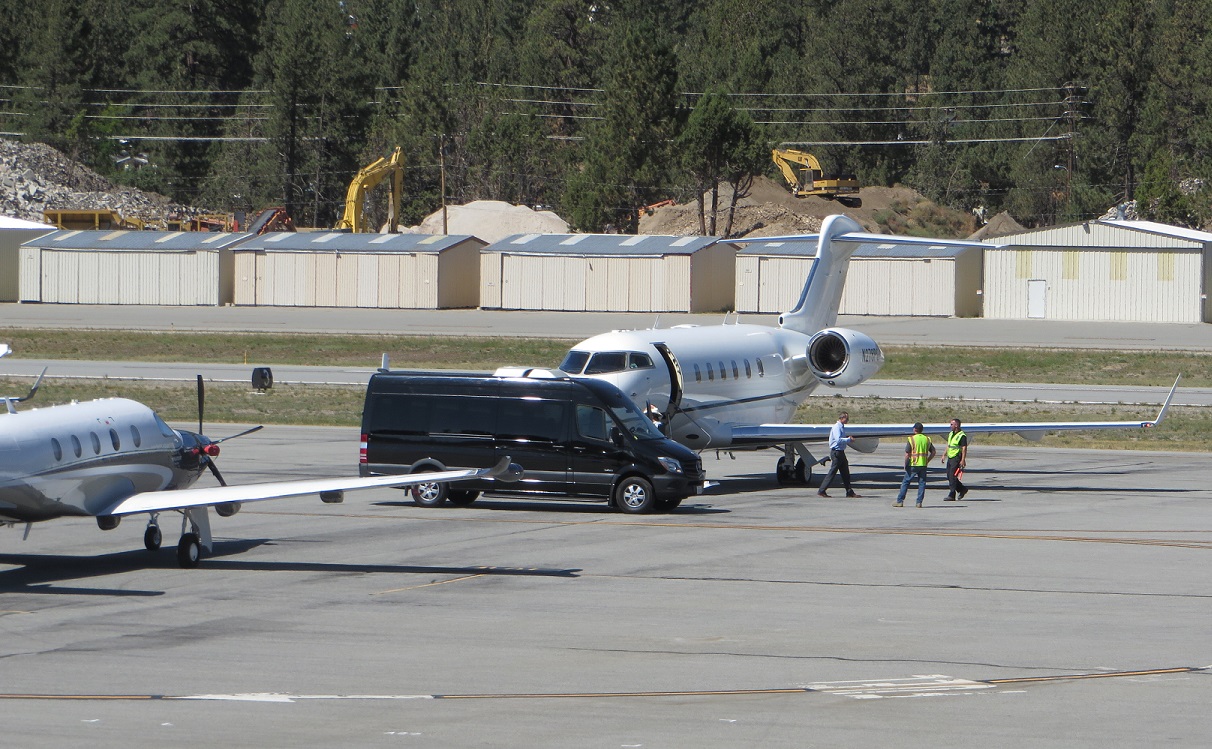 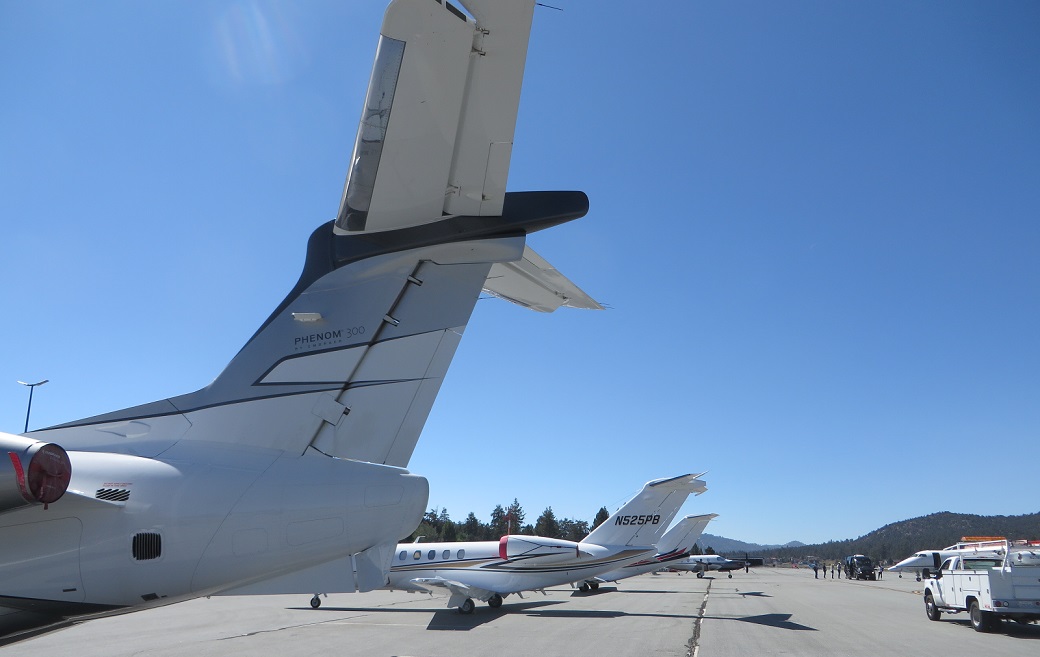 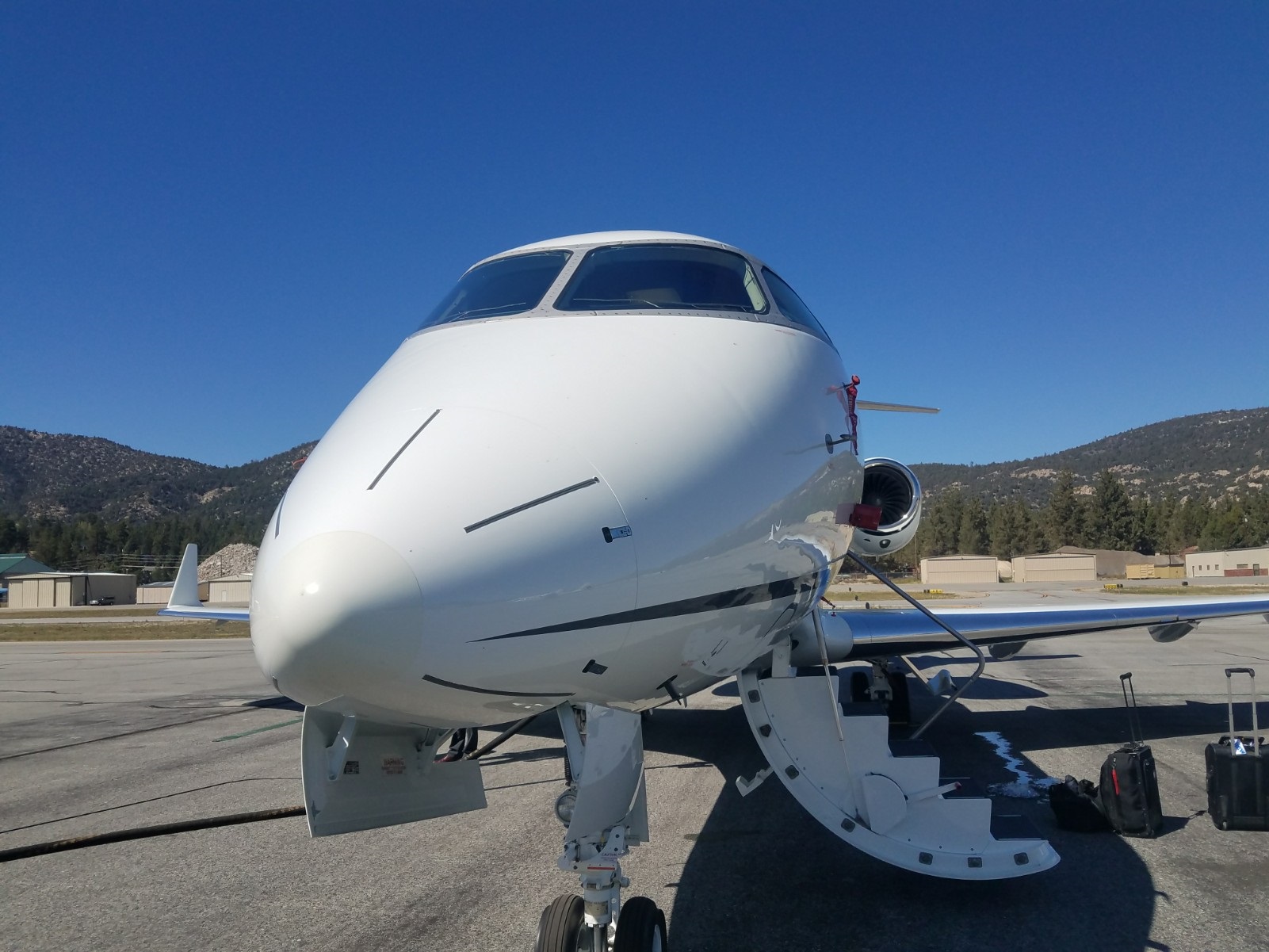 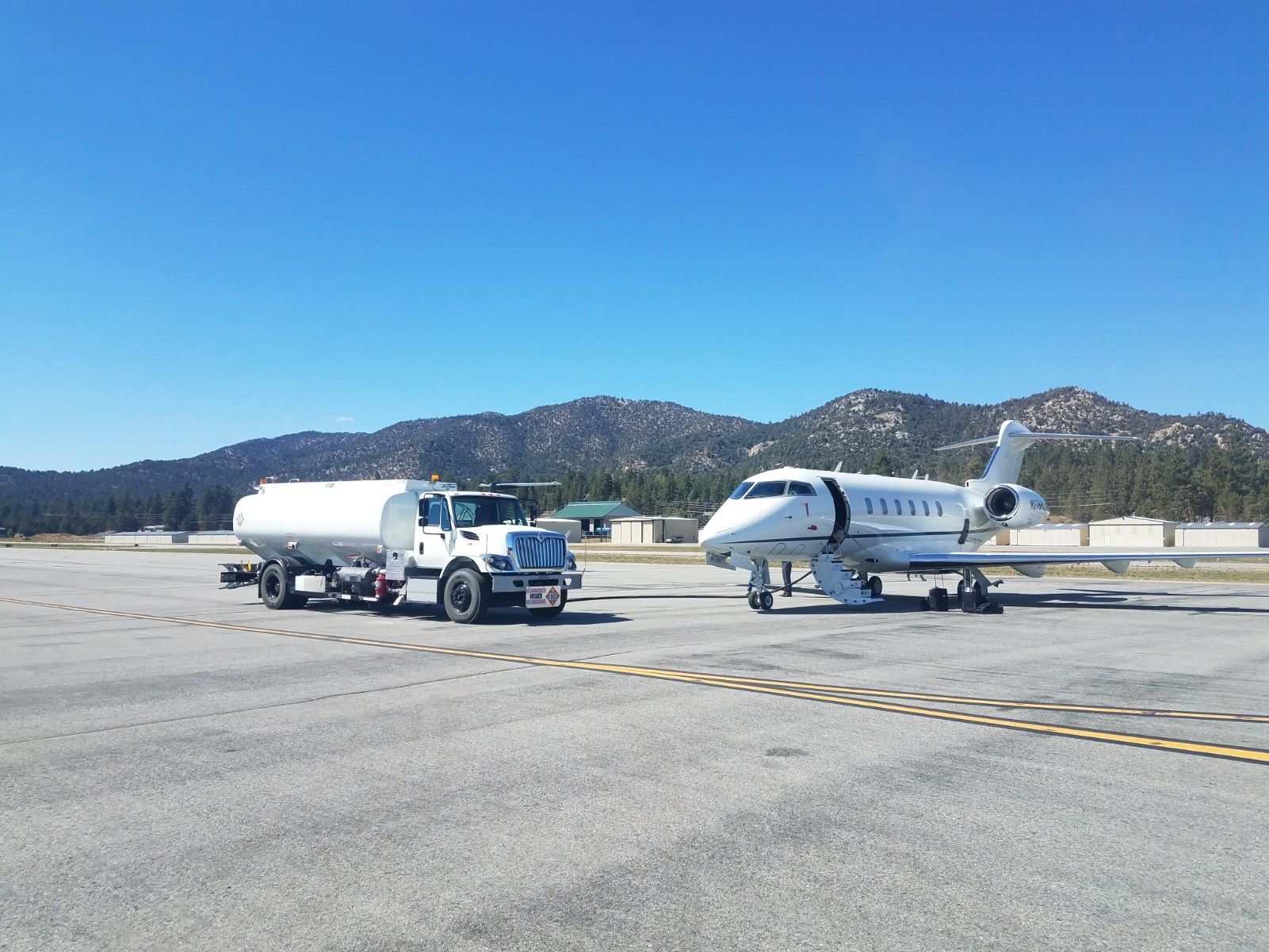 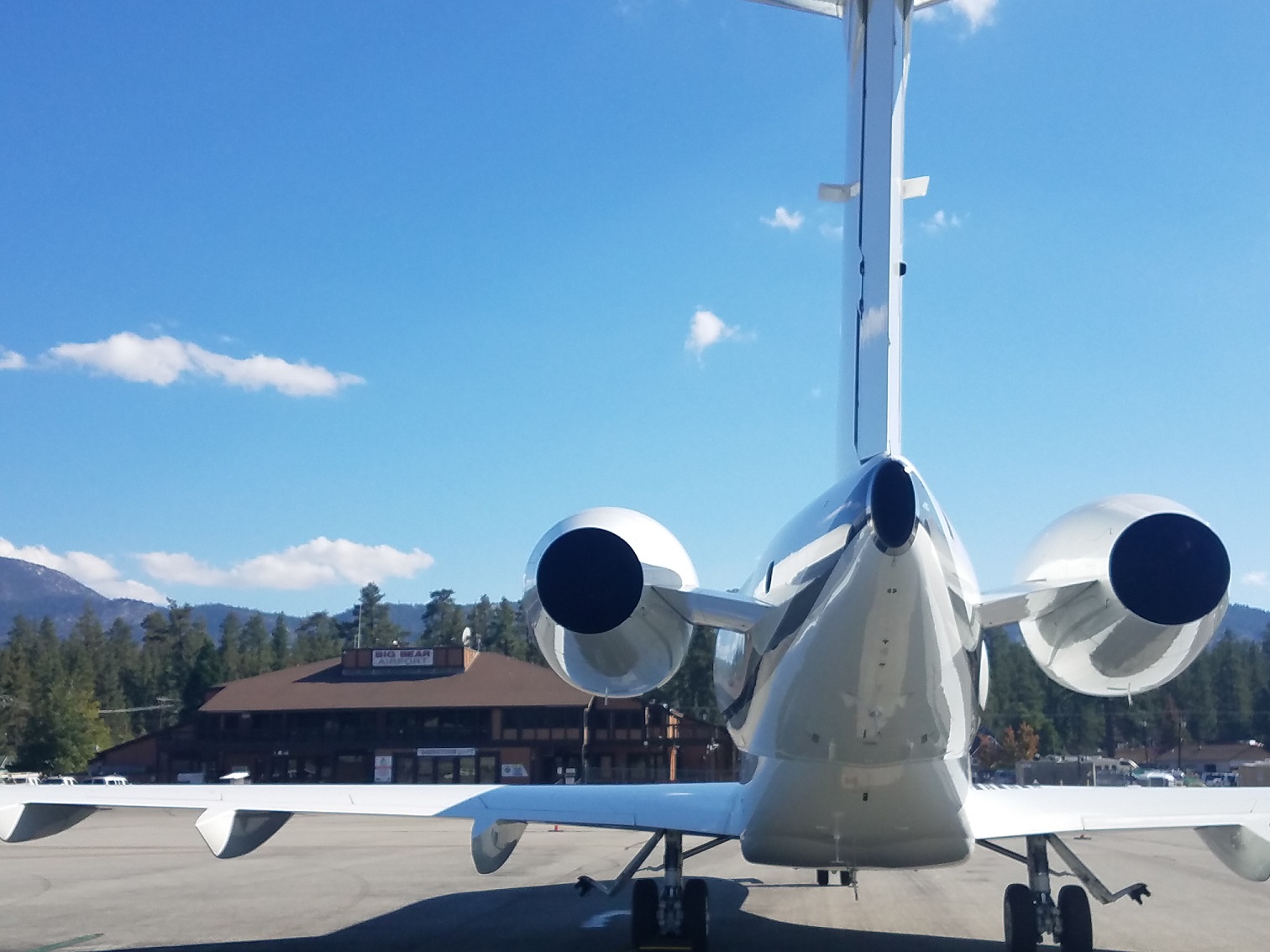 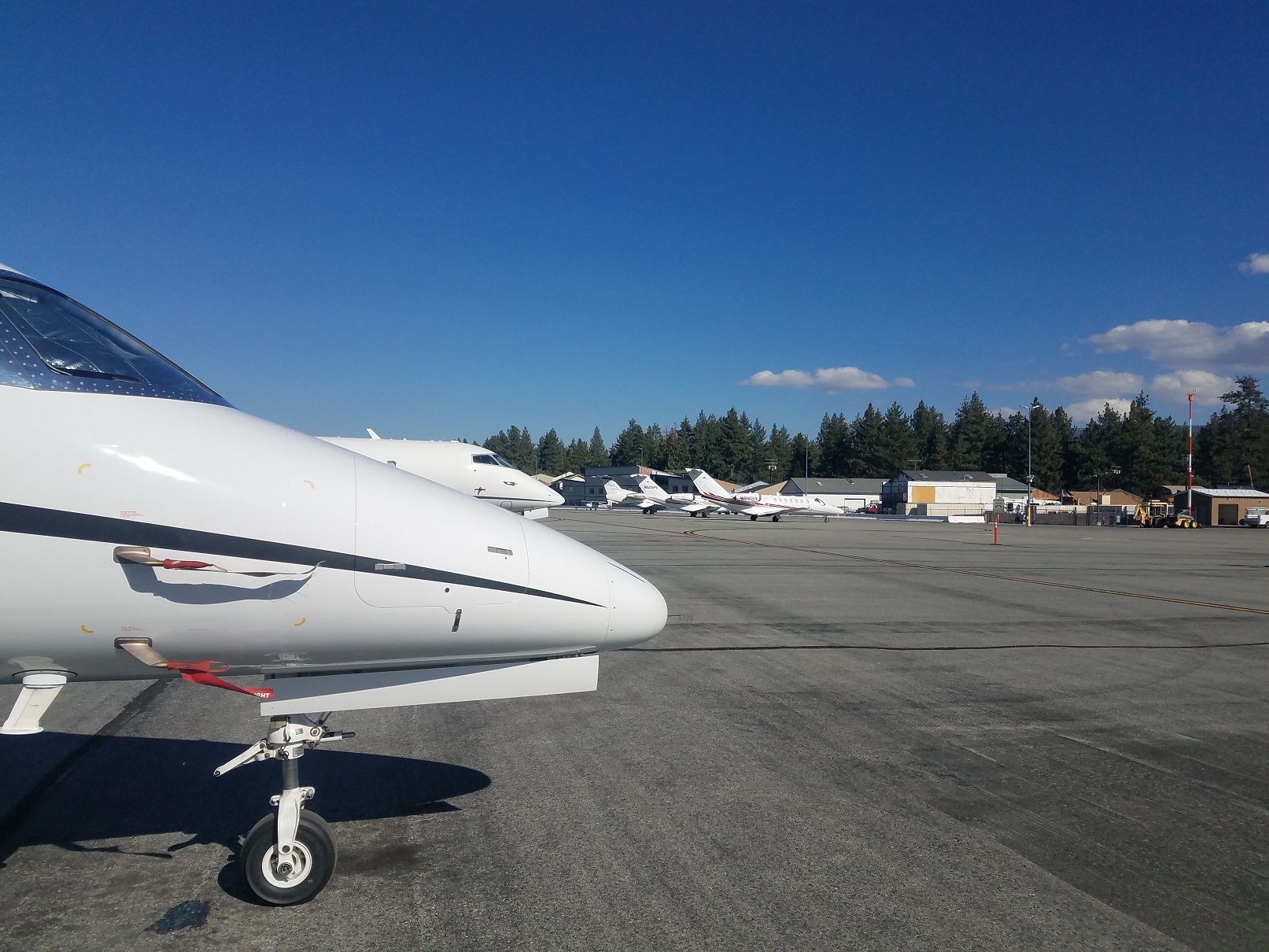 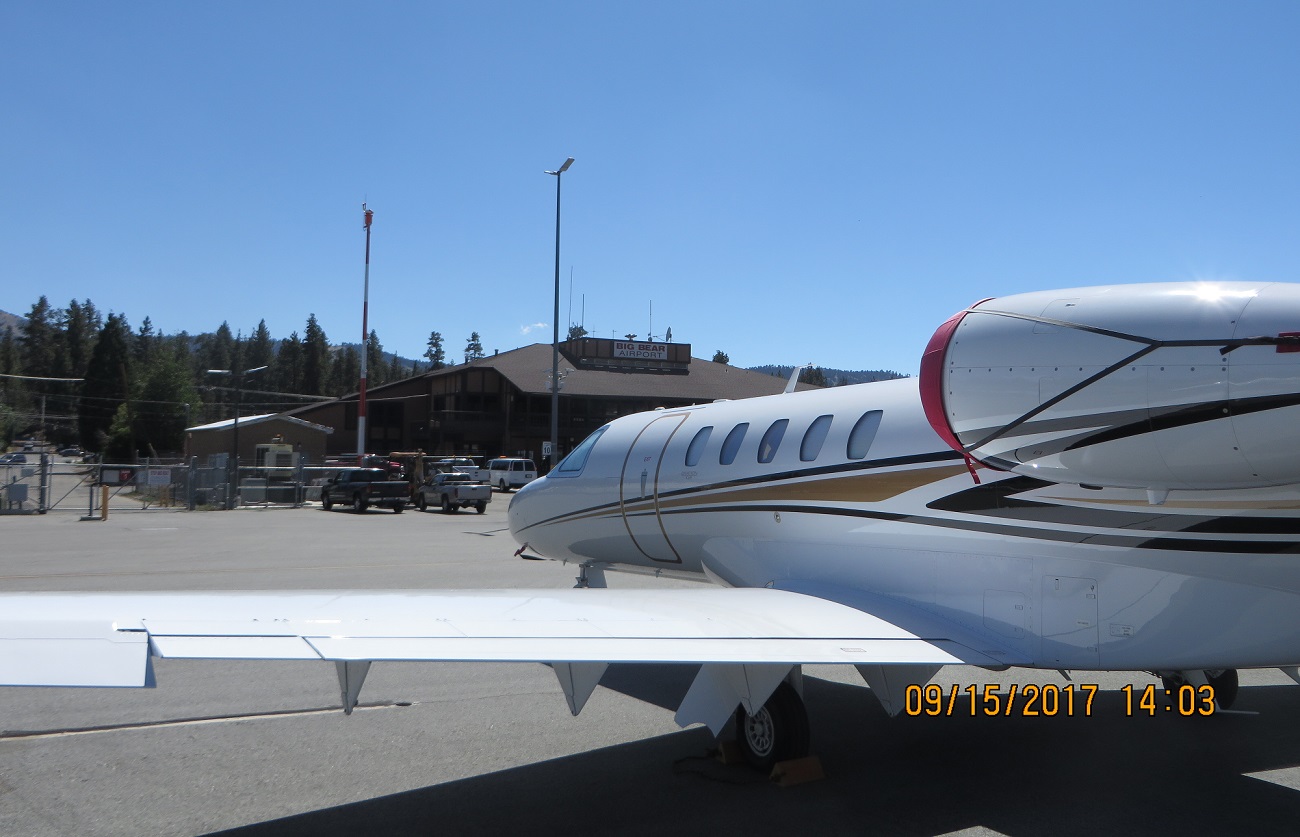 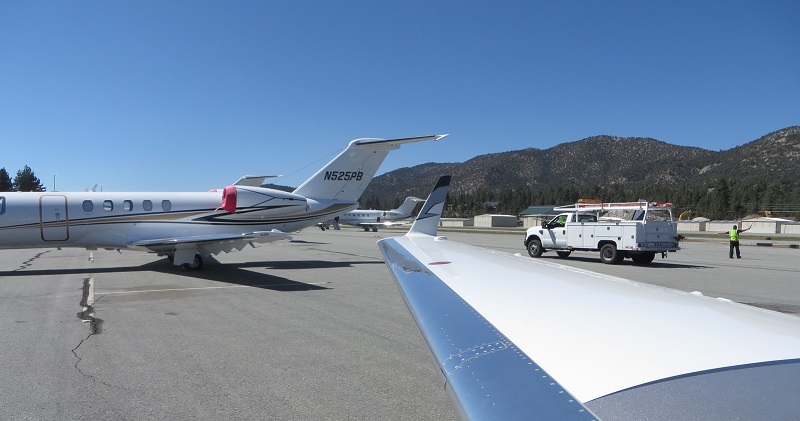 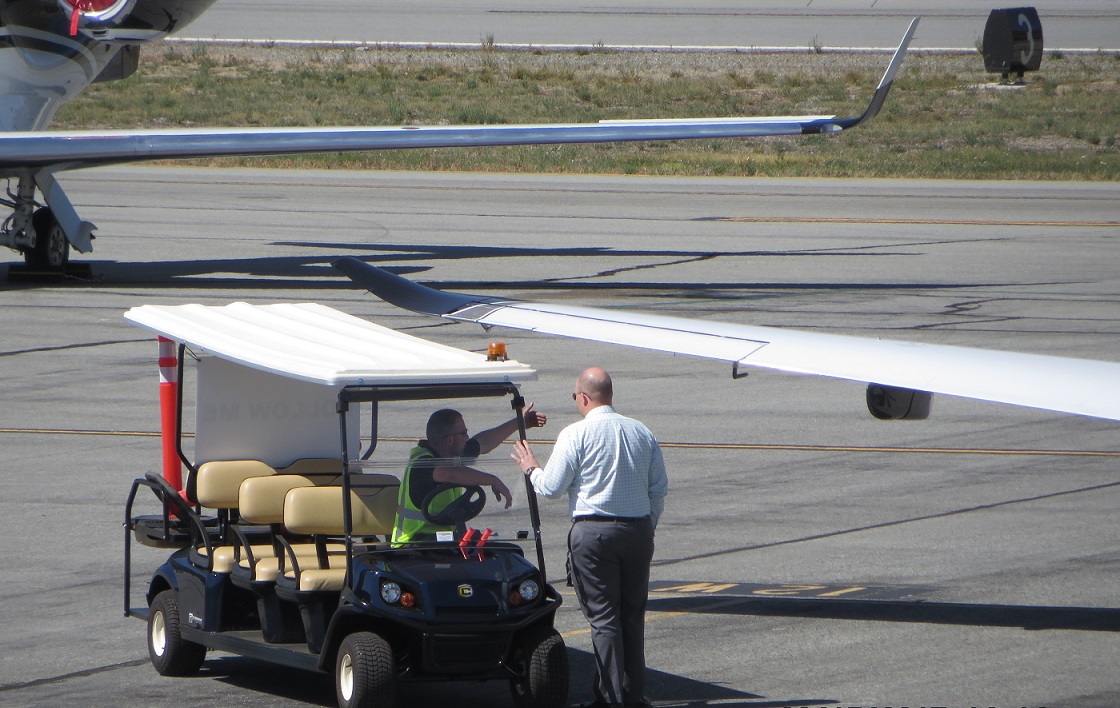 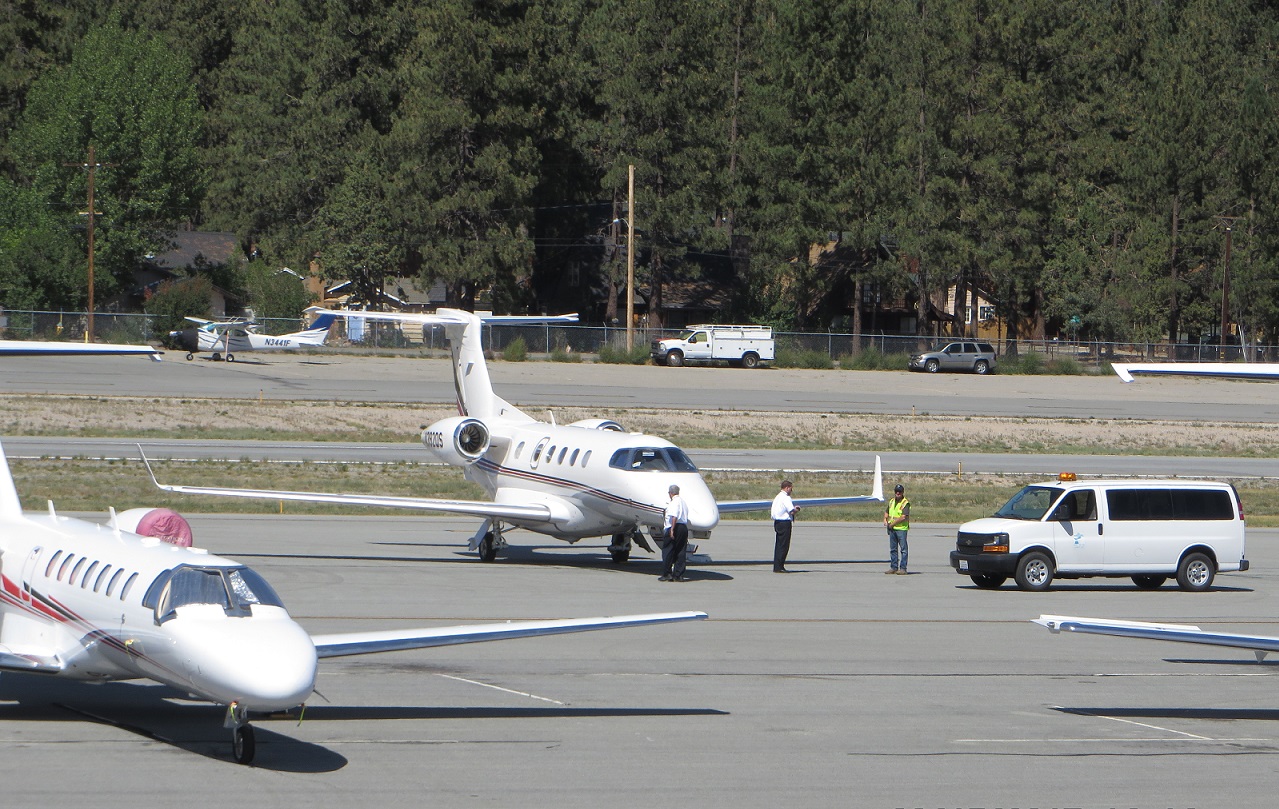 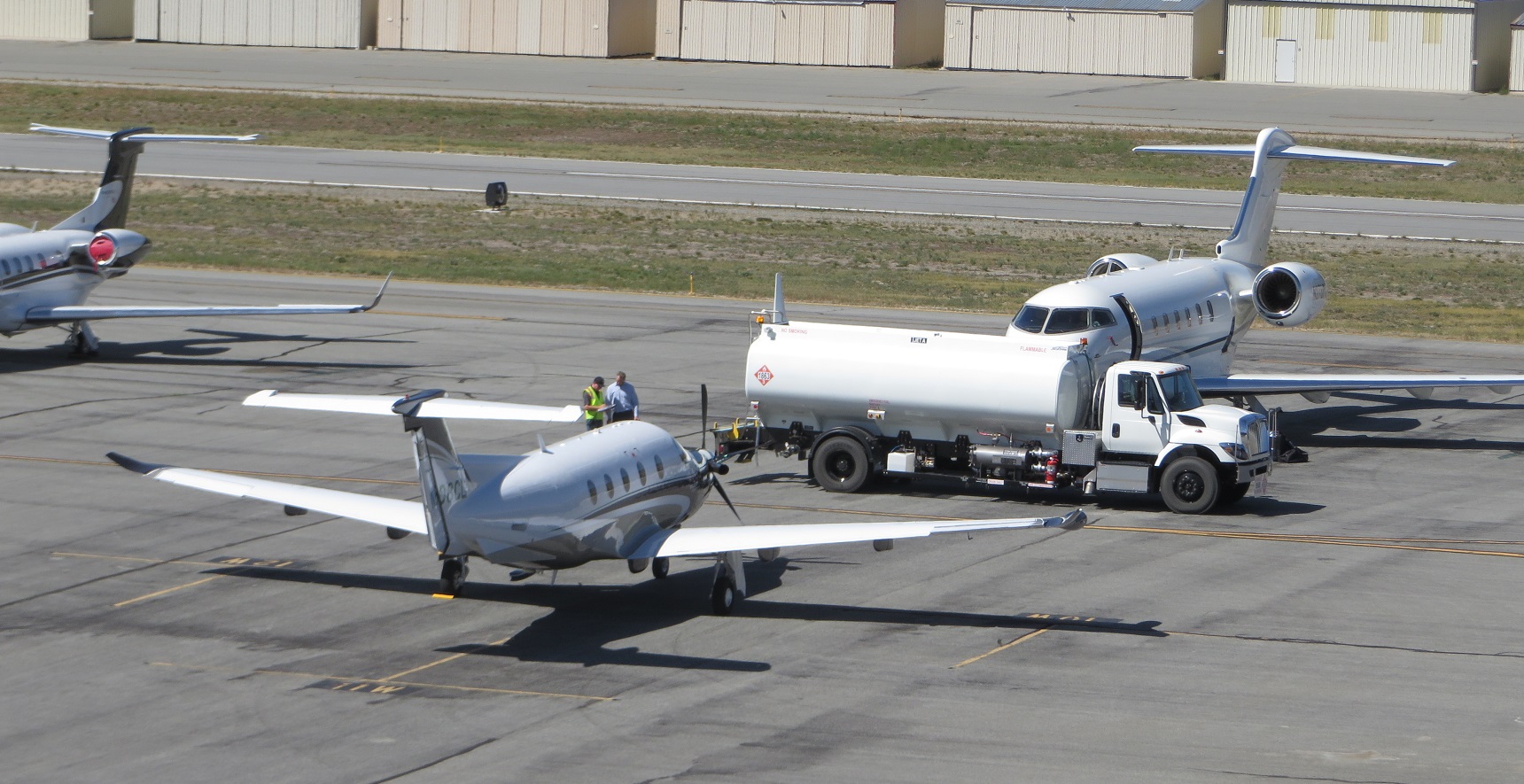 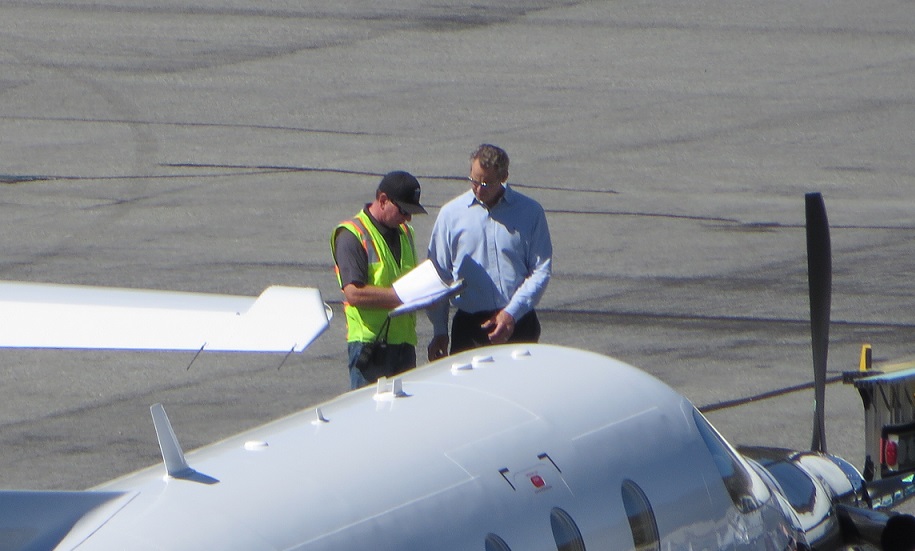 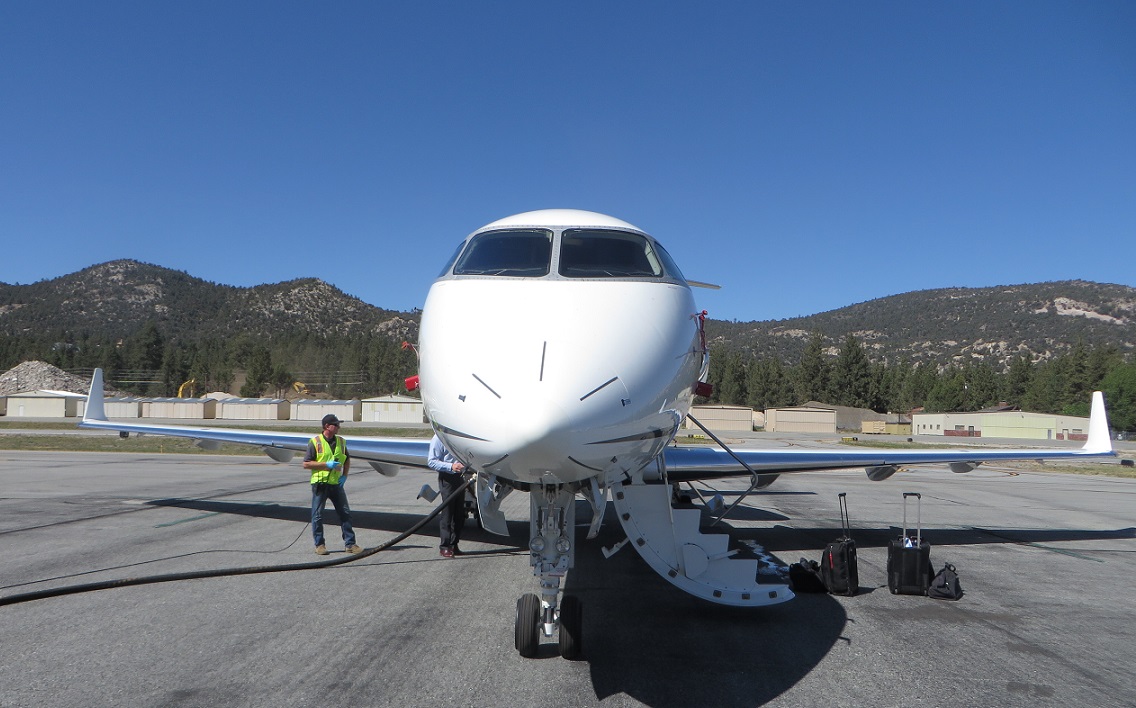 Please respect our neighbors. AVOID FLYING between 10 pm - 7 am.